Living on the Edge of the World

A designer, a comedian, and a chef.  Ostensibly not a lot in common, other than success—living different lives in different parts of the world, pursuing different goals.

But I had each of them as a college counselor, and I can tell you, they had a lot in common.  None of them took the world at face value; they wanted to see what was underneath the surface, because the only way they could appreciate the quality of life’s outcomes was to understand the integrity of the process creating that outcome.

If the process challenged the status quo along the way, asked a question that had an answer no one else pursued, was based on a clear understanding that there was something better out there that wasn’t in focus just quite yet—well, that was worth pursuing.  If it was a question with an answer that was already a part of the milieu, well, forget it.

It isn’t easy seeing the world that way, ever—but especially so at seventeen.  Convinced you’ll live forever, sure the rest of the world can’t possibly see things the way you do, the designer, the comedian, and the chef embraced professions that required them to make people see the world they way they do.  It wasn’t enough to see the line on that groundbreaking skirt if no one wore it, or to bring those flavors together in a new way if no one tasted them as an ensemble, or to get to a punch line with a new perspective if no one heard it.

They didn’t have the adolescent convenience of dreaming up their version of the way the world is supposed to be, and living cozily in that bubble until reality came along to pop it.  The only way their life was fulfilled was for someone to embrace their new idea and welcome it into the everyday world.

Even then, the joy was momentary.  When you live on the edge of the world, your job is to bring What If to life in a way that delights others.  Once that happens, the newness of What If quietly folds into the huge mound of What Is, and the idea that was once seen as innovative is now business as usual, pushing the boundaries of the known out a little farther—and pushing the designer, the comedian, and the chef a little farther away, to a new edge of the world.

Creation implies newness, and once an idea becomes part of what’s known, fidelity to creativity is only measured by concocting a new something new.  It is your calling; it is who you are, and fidelity to self is the ultimate badge of honor in the world of something new.

If you aren’t careful, that life can be pretty tiring, given everything else the teen years bring that isn’t new to the world, but can be painfully new to you.  Like every student I’ve ever worked with, I had to sign a form telling their colleges they were ready to engage in the uncertain world of creating among thousands of other like-minded young adults.  They were ready, so I signed their forms, but the creative life offers no guarantees—and as I lifted my pen off the page, I hoped the balance they had in their lives right then would stay with them all of their days.

The headlines have been sadly full of stories about a different designer, comedian, and chef.  No one can say what their balance was in their final days, but it is a reminder that we must look sharp and stand guard for all our students, most especially the creative ones.  Their minds are mighty palettes of the possible, but their hearts must be equally resolved to keep one eye on the world as it is, and one in the world that could be.  We must always help them do that. 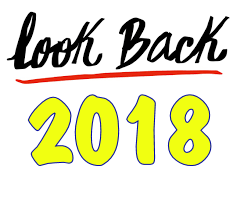 A former boss once marveled that parents thought June was the month when teachers and counselors were “winding things down.”  “We aren’t winding anything down” he told me, “we’re running of a cliff.  We go faster and faster, gaining momentum as our feet teach the ground, and then, the last day of school—nothing.”

This year certainly seemed like a perpetual marathon for school counselors, with events that pulled even the most dedicated counselor away from their own work long enough to look around at national trends in awe, grief, or delight.  Here are some of the most memorable events that shaped our year.

School safety  The string of school shootings and safety issues continued this year, as the start of the year suggested our profession and our students would simply be victims to more cycles of violence, promises to change things, and more violence.  That gloomy prognosis was mightily stirred by the survivors of the Parkland shooting, who saw to it that things would have to change.  Months later, there is the memory of a DC demonstration; the work of a federal School Safety Commission, and an upcoming bus tour where Parkland survivors will urge young people to register to vote, and bring in a change to Washington.  The Santa Fe shooting that came this spring is a tragic reminder of how far we have to go; the Parkland students are determined to help get us there.

Opioid abuse  Legislators took notably swift action in many states to try and disrupt the pattern of opioid abuse that is affecting every families, schools, and towns of every size and status.  From limiting the size of related prescriptions to increasing state recordkeeping requirements to increasing school budgets to make schools safer, states are eager for more information on how to create teams of support that join the efforts of schools and communities to turn the tide of addiction.

Increased interest in career and technical education  The chant of “every student must go to four years of college”  was sharply muted this year, as a number of advocates urged schools to make sure all students had a complete understanding of the full array of options open to them after high school.  One of the most notable proposals is working its way through the Michigan legislature, where CTE champions are asking for more career counselors—but also asking schools to rethink the way even the most basic skills are taught, all in the name of teaching the skills students will need to develop the habits, attitudes, and skills needed to engage the ever-growing field of CTE.  The best news is that many of these skills are the same ones students need to be successful in college, further proof that the CTE/College choices of yesterday are no longer an either/or option.

Increases FAFSA completion  A large number of states are reporting significant increased in FAFSA completion, thanks in part to the earlier October 1 filing date.  At the same time, up to 30 percent of these applications are being flagged for verification, a time consuming process that can discourage low income students from finishing the process.  Calls to simplify the FAFSA process continue, as counselors await the rollout of the FAFSA app for smart phones.