School has just started, and I’m already disappointed.It’s not because this is going to be a difficult year for my students applying to college. Admission to well-known colleges will be a challenge, but with a small decline in the size of this year’s senior class, opportunities for admission may just go up a bit.It has nothing to do with families needing help paying for college.  Even with the ups and downs of the stock market, colleges are finding ways to offer more assistance than ever before to families in need.And it certainly isn’t the quality of the students I’m talking with.  They’re more involved, more focused, and as a whole, more calm about college than most students I’ve known in past years.So what is the cause of my disappointment?  I didn’t get an answer to my question.There I was, in the Detroit studio audience of the MSNBC special “Making the Grade” that was broadcast live to the nation last month.  The topic was getting America’s students college-ready, and they asked for questions from the audience.  I raised my hand, told the producer my question, and 30 seconds later, I was on national TV.“We all realize college is important” I said (I was a little nervous, so I think that’s what I said).  “Yet out of all the school counselor training programs in America, only one requires counselors to take a course in college advising.  What’s it going to take to get everyone else on board?”To be sure, someone said something after my question—it’s just that what he said didn’t answer my question.  He talked about how getting into college wasn’t a problem anymore, thanks to so many colleges offering online classes.Since you don’t get to rebut anyone on national television, I took my seat, knowing I’ll have to wait a little longer for a real response.This wasn’t the first time this has happened.  For the better part of six years, I have talked to counselors; the counselor educators who run counselor training programs; state legislators, and Congress and asked them the same question.  If college is so important, why don’t we train counselors how to help students prepare, apply, and pay for college?If two-thirds of the young adults in a recent poll said their school counselor was of little or no help choosing a college, why aren’t we helping counselors give better help to our students, the future citizens and workforce of our country?If 95 percent of the new counselors in a 2007 poll said they thought a college counseling class should be part of counselor training, and over 60 percent said the class should be required of all counselors, why isn’t college counseling taught to every counselor, now?Like every school counselor, a big part of my job is giving answers to students and families when they don’t know where to turn for college help.  If no one shows me where to find those answers, how much of a difference can I make in the life of a young person, no matter how much I care?Everyone I talk to understands this is a problem, but no one seems to want to do anything about it.Come next spring, college-bound seniors will have an answer to their biggest college question, “Where will I be going next year?”By that time, I sure hope I have an answer to mine.________________________________________________Patrick O’Connor’s new college guide, College is Yours 2.0, offers a better way to apply to college.  It’s available now through Amazon.com, and discounts are available for school group purchases. 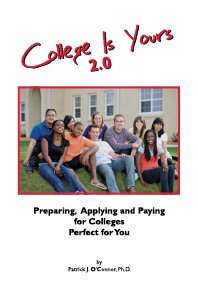 Coming Back for a Change

The last week of August finds some school counselors saying goodbye to summer, while others have been hard at work for at least the last two weeks.  It’s hard to believe school can be in full swing for so many at such an early date, but that’s part of the change in our world we have to get used to……and if any group should be ready to make the most out of change, it’s school counselors.  Most of what we do is all about change; we work with students to change their academic behaviors to lead to better grades; we support parents as they look for ways to change the way they help their children; we offer new ideas to students, parents, and teachers as they try as students try to move beyond the past and build more solid futures.Our training and experience tell us that change is often a challenge.  The need to change often comes when we’re dealing with a million other issues, and since change can challenge the way our clients see the world, it can be uncomfortable; this is why so many people decide it’s easier to stick with an imperfect status quo than build a different future.  Our clients tell us this in both their words, and especially in their actions; if every client we’d ever met simply did what they said they would do, there’s a good chance our world would be vastly improved, and we may even be out of work.Knowing the challenge of change, it’s important for us to model the behaviors we like to see in our clients—and there’s no time like the present.  Settling back in to school, we often remember a part of the job we’d forgotten about over the summer, a task that may have nothing to do with counseling, and a chore we’d really like to get rid of.On the other hand, it could be we look at a specific program we’ve developed for our students and think, “This could be better, or different.”  It may be the handouts need to be updated, or the entire program put on the school’s counseling web site—then again, it may be that your counseling office needs a web site in the first place!In the interest of leading by example, now is the time to take five minutes and ask ourselves the questions we often ask our clients:If there were one thing I would change about my workplace that I can change, what would that be?  How would I change it?  What would I need to change it?  When would I change it?  Who could I ask to help me change it? How would I know it’s been changed?This is a busy time, and resources may seem to be in short supply—but change indeed can be inconvenient in its timing, and the road to being better can bring its twists and turns.Still, there’s nothing more inspiring to many students than to know they aren’t alone in their quest to finding something better. As the new school year begins, now could be the best time to change the motto of the school counseling office to Lead by Example.Enjoy the challenge of this great school year.
Posted by Gene at 8:47 AM No comments:

The Reason you should do What Nobody Else Does

A high school junior was getting ready to attend a college fair, so she stopped by her school counselor’s office to get some advice on how to prepare.  They talked about the colleges she might want to talk to, the questions she should ask, and the importance of writing down the answers each college gave her.

The counselor then suggested the student take a copy of her transcript along to show to the college admission officers.  “It will give them a sense of what you’ve done, and they can offer suggestions on what you can take next year.”

“Does anyone else do this?” the girl asked.

“No” the counselor responded, “but you should.”

The week after the college fair, the girl’s mother came by the counseling office.  “Thank you so much for talking to my daughter before the college fair.  The colleges were impressed by the questions she asked, she felt more confident, and after she showed them her transcript, one college even said they’d most likely offer her a scholarship worth $68,000.”

The key to this student’s success lies in three simple steps:

She planned ahead.  By paying attention to school announcement and counselor e-mails, the student had ample time to know the college fair was coming.  This gave her plenty of time to prepare for the event.

She asked for help.  Part of her preparation was realizing she didn’t know what to do, but because she had plenty of time before the event, she was able to get the assistance she needed—and was able to do so without putting the counselor in a time crunch.

She acted on the advice she was given.  It would have been easy enough to thank the counselor, walk out of the office, and forget what his advice was.  It also would have been easy enough for her to say “Is he serious?  I’m not going to be the only one to take a transcript to the college fair!” But she knew her counselor well enough to trust his advice, and felt confident enough to do what she needed to do to take care of herself—and that confidence made all the difference.

In about a month, many seniors will start to panic, and decide it’s time for desperate measures:  mailing homemade chocolate chip cookies to the admissions office; renting billboard space on every freeway that leads to the college, to make sure the rep reading your application knows your name and face; signing up for 9 clubs at the start of senior year.

Instead of panicking in a month, sit down two weeks from now and think about the next steps you need to take on your college path.  Once that’s done, seek out the help you need to complete that work, then take action.  This may not bring the same adrenaline rush as writing your college essays ten minutes before they’re due, but in the hurricane that college admissions can become, there’s a lot to be said for operating from the center that’s the calm of the storm.