Unlocking the Mysteries of May 1 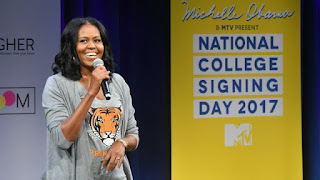 May 1 has been the center of conversation in the school counseling community this year, thanks in large part to Michelle Obama.  The former First Lady and founder of Reach Higher established May 1 as College Decision Day, a day for high schools to celebrate the decisions seniors are making about their lives after graduation.  The idea came from the national signing days held for athletes when they announce what college they’re attending.  Mrs. Obama’s reasoning is, and was—if it’s good enough for athletes, it’s good enough for everyone.

May 1 was selected in part because it’s also the day many colleges require students to submit a deposit, letting the college know the student plans on attending college in the fall.  This may seem like a simple idea, but it isn’t—or it’s too simple, and people want to make it harder than it is.  Either way, let’s review.

Do all colleges require students to deposit on May 1?  No.  Generally, the only colleges that do are those colleges receiving more applications than they can admit.  This is one way to sort out who’s really coming, and it can give the college a chance to pull additional students from their waitlist if they need to, in order to fill their class.

If I’m on College A’s waitlist, should I deposit at another college?  Yes.  Colleges don’t usually admit students from their waitlist until after May 1.  If that’s the case with College A, it may be May 5 or 6 before you find out they didn’t take you from their waitlist—and by then, it’s too late to deposit somewhere else.

But what if College A does take me from their waitlist, and I deposited somewhere else?  At that point, you can deposit at College A, as long as you call your other college right away and tell them you aren’t coming after all.  You can also ask them for your deposit back, but it’s unlikely you’ll get it.

Do all colleges require you to tell them you’re coming by May 1?  Again, no.  It’s always a good idea to tell a college once you’re sure you *aren’t* coming, but if you’re choosing among two or three colleges that don’t require a deposit or notification, you can take the whole summer before deciding.

Can I deposit at more than one college?  The real answer here is no.  Colleges have to build budgets and schedules, and that takes time.  If 100 students deposit at State U in May, then decide just not to show up the first day of school because they deposited somewhere else, State U loses a lot of money, and has to cancel more than a few classes—especially if State U is a small school.  You might not care about that if you aren’t attending State U—but what if this exact same thing happened to your college, requiring them to close your dorm, cancel two of your  classes, and offer no meals on Sundays?

Two deposits is like asking two different people to the same prom.  It isn’t illegal, but it is a horrible idea.

I want to talk about College Decision Day.  Why just celebrate the students going to college?  The good news here is that most high schools include all seniors in their CDD celebration, honoring those going to college, entering the military, or heading into the world of work.  If lots of seniors still have their future plans up in the air, some high schools will delay the celebration, putting it later in May, or building it into graduation.
Posted by Gene at 11:57 AM