Educators across the country are breathing a sigh of relief, as Congress is almost done with
the Federal budget before heading off to get re-elected.  This is the second year the Trump administration asked Congress to cut the budget for the Department of Education (also knowns as ED), and it’s the second year the budget itself was going to eliminate several popular programs, dedicating more funds to programs focused on school choice.  For the second year in a row, Congress is on its way to denying both requests. 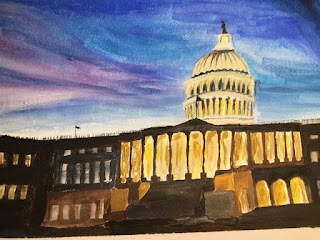 If this all strikes you as good news, just wait—there’s even more.  Congress is actually on track to increase education spending, including an increase is known as Title IV funding, or Title IV A funding.  Title IV funding can be used for any resources related to Student Support and Academic Enrichment (SSAE).  That creates all kinds of funding opportunities, including technology upgrades, STEM programs, AP testing—and school counseling needs.

Yup—the Federal government is about to give you more money for counseling, including the hiring of school counselors.

The counseling community is abuzz over the prospects of what this money can do for counseling programs.  Since part of the rationale for the funding increase is the need for safe schools, it won’t be too hard to make a data-based argument that counselors make a difference in creating safe, positive school climates.

At the same time, it’s not like we’re the only ones who know this increase is coming.  Title IV funds have been around for a while, and many states have long-established ways of allocating the funds to all kinds of programs.  It’s certainly true that Title IV dollars could be used to hire more counselors, but that would require a state to spend most, if not all, of its increased funding on a single area.

That’s an uphill battle, so you’d better be armed with effective tools.  If your plan is to get more counselors in your school with Title IV funds, line your data up.  You’re going to need to show the needs students have—that’s the needs students have, not the needs counselors have—that research shows counselors can meet.  Work with your state and national counseling association to build your data base, and to find out what other schools are doing to build effective strategies.

Once you have your facts together, get some friends.  There’s a good chance you don’t know the person in your state department of education who oversees writing the grant for Title IV funding.  That’s someone to get to know.  See if you can get copies of previous grants—they’re out there—to see what other programs are likely to ask for more funding, too. Build a team of support in your school, and in your district.  Principals, superintendents, and board members are the voice of your school at the state level, and they’re going to use that voice to advocate for something.  How can you get them to advocate for you?

It’s also important to remember that Title IV funding only lasts for one year.  Safe schools are of big interest this year, but if something else matters more next year, this year’s Title IV funds could disappear.  That’s why it might be wise to take your data-rich argument to your state legislature, to see if they can find state funding for counseling positions.  Colorado did this, and within four years, the positions paid for themselves, and saved the state $300 million. If they can do it, you can too.